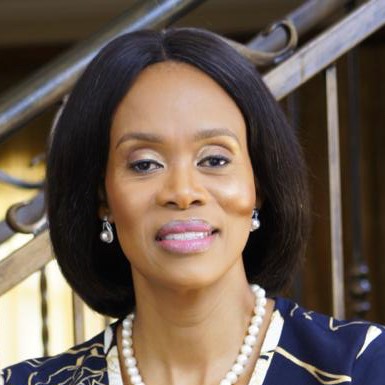 Shiphra Chisha (M.Inst.D) is the President of SADC Women in Business and the Global Executive Head of the BRICS Institute. She is a highly accomplished executive, a director of companies and a social scientist with over 20 years’ experience in successfully developing and implementing company strategies, providing long-term vision for organisations, business model strategist and sustainable community development expert throughout mining communities across the continent. An entrepreneur and respected strategic thinker with extensive experience in small medium enterprises, social development, enterprise development, finance, investments and mining community economic development. With valuable leadership experience gained as non-executive Director and Trustee in the mining community sectors. She has served as the Chairperson and Trustee of the Anglo American Inyosi Coal Community Trust from 2008 to 2018.

Her current role as the Global Head of The BRICS Institute involved developing and implementing the BRICS Institute strategy and the BRICS Executive Leadership Programme. The role involved collaboration with the Department of International Relations and Cooporation to ensure the BRICS strategy implementation through the BRICS Executive Leadership Development Programme within the BRICS nations. She is a member of the BRICS Skills Working Group South Africa which forms part of the SA BRICS Business Council.

Ms Chisha is the Founder and President of the SADC Women in Business (SADC-WIB), an entity set to unify voices of women owned businesses in Southern African Development Countries representing the fastest segment of the economy in Africa. SADC-WIB propels women entrepreneurs in business and social power worldwide to ensure they benefit in the new AcFTA to achieve the sustainable development goals and drive the Africa strategy agenda 2063.

During her tenure at Nedbank she managed a total average book of NAV2 billion and worked with 284 Government Municipalities nationally. Under her leadership as the Chief Executive Officer of Sishen Iron Ore Company Community Development Trust (SIOC-cdt), she implemented over 200 projects in the Northern Cape and Limpopo worth over NAV1,5 billion in education, health, welfare and enterprise development. Ms Chisha was entrusted to form and oversee an investment entity to manage the ZAR1billion of funds which were fully invested with a fund management company. The entity completed 4 major transactions in 18 months, including 26% of JSE listed Basil Read, 26% of ASX listed Continental Coal, 33% of unlisted SA Airlink and 51% of unlisted Hotel Group Urban Hotel Kathu. As one of the founders of the Africa Mining and Community Enterprise Development she was involved in developing the implementation plan and policies for the Hernic Ferrochrome Tshwaranang Community Umbrella Trust ED.

Ms Chisha is the principal consultant at MKT Investments, a consulting firm established just over 10 years ago that collaborates with its network of mining communities, mining companies, government and other partners to shape an impartial and sustainable continent. She cultivates sustainable community and corporate strategy solutions through consulting, workshops and sustainable development programmes. She strives to be the catalyst between corporates and mining communities in building economically stable initiatives that benefit both parties. Her mission is to build together with businesses and governments a fair and sustainable continent that uplifts impoverished communities and the people who live in them. She pictures a continent in which everyone can maintain a thriving and noble existence within the borders of the continent’s rich resources.

Ms Chisha was elected in 2004 as one of 20 women awarded a scholarship by Liberty Life to attend a Strategic Leadership Program with Gordon Institute of Business Science. She holds a Masters in Business Administration (MBA), Management Development Programme and a Bachelor of Commerce in Economics from the University of Johannesburg and a Strategic Leadership Programme from GIBS.